The last post was about a particular kind of pattern-poem in which the same sequence of syllables could be traced out by two distinct movements through the verse: the standard one, which moves from left to right across the eight syllables of a line, then down to first syllable of the next line, and so on; and the “half-turning” motion, which moves down across the first syllables of each of the four lines, then up through the last syllables in reverse order, and then back to the second syllable in each line, and so on. There is another variety of this general type of pattern-poem which is called sarvatōbhadra-, literally “good in every direction,” where both of these movements are possible, but in addition, there are two other movements, resulting in a total of four ways of moving through the syllables of the verse and arriving at the exact same sequence of syllables.

The verse comes, once again, from Māgha’s Killing of Śiśupāla, verse 19.27:

This verse, part of a set of syntactically-connected verses, describes an army (sēnā), and Paul Dundas translates it as follows:

… its arrows putting an end to both the maneuvers and the lives of exuberant foes of every rank, engaging in battle with a genuine passion, its military bands vying with the neighing of magnificent cavalry horses…

The first movement is the standard one, from left to right, and down each line:

The second one is the “half-turning” (ardhabhramaṇa-) movement we have already seen: 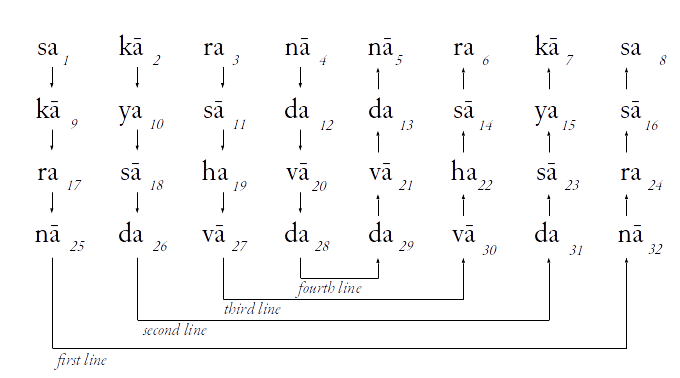 So far it is identical to the “half-turning” type. But the difference is that each eight-syllable line of the “omnidirectional” verse is also a palindrome, i.e., it can be read from right to left in addition to right to left. Hence this is the third movement:

And because of this type of symmetry, we get another one for free, which is the equivalent of the “half-turning” movement, but in the other direction: starting from the top-right syllable, going down, and then going up from the first syllable of the last line:

Just as before, we can visualize the different motions as functions of the syllables numbered according to the standard motion. Hence the three additional motions will looks as follows:

A lost work on Kannada meter